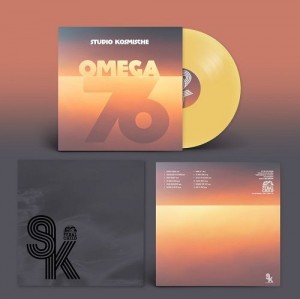 Feral Child’s first release in what promises to be a hectic year for the label born from the ashes of Polytechnic Youth (and with nods to label head Dom’s previous labels Great Pop Supplement and Earworm as regards its genre crossing / ‘anything goes’ release policy).

“Omega 76” is a wonderful record, leaning more towards a full band kinda set up as Dom Keen is joined by ‘The Hologram People’ bandmate Jon Parkes on drums / percussion and Robin Waterson on various instruments. It is arguably more immediate than the previous (quickly sold out) “Alpha 77” set. 12 wonderful tracks that merge kraut / kosmische flavoured ambient electronics with psychedelia, which whilst recalling the works of Harmonia, Cluster, Klaus Schulze, Eno et al also sound remarkably fresh and of the moment, now….

Longterm supporters of both label and artist, ‘Concrete Islands’ write: “Omega 76” is a more animated and communalist collection, one during which we are ushered into the same bubbling waters as Harmonia (“Constellation in the North”), the psych-rock terrain of Amon Düül II (“Ethnic Forgery” and “Skimming Over Pluto”), the electro-fizz of Michael Bundt (“The Robots Cruise” and “Stuck in the Sequence”) and the lysergic fog of Spacemen 3 (“Blues in Space”)”.

Whilst J. Wasko of “The Ominous Drone”, a recent champion of the band, says “Inspired by early Kosmische pioneers like Cluster and Harmonia what you get is pastoral calming tunes that are neither purely ambient or drone but satisfyingly lies somewhere in-between. This is my wheelhouse. This is the stuff that relaxes and calms and lets me drift off to sleep or reflect on a quiet morning. Drones layered with subtle keyboard tones and pads punctuated by undulating effects, LFOs and syncopated bleeps and bloops. Just put this on and float driftless on the lazy river of your mind. It’s hard to explain but there are certain chord progressions and tones that always resonate for me. It’s why I like two chord rock and ambient inspired albums from artists like (label favourites) Ancient Ocean. It hits just right”.

There you have it. Another strongly recommended set from Dom Keen and destined to sell out super quick once more.

Barry says: Another superb release from Keen in his 'Studio Kosmische' hat, with Jon From Hologram People joining in. Deep grooves, beautiful synth lines and as always from Dom of Polytechnic Youth / Deep Distance / Feral Child, a gorgeous looking end result. Wonderfully accomplishes and arguably even more hypnotic than the superb 'Alpha 77'