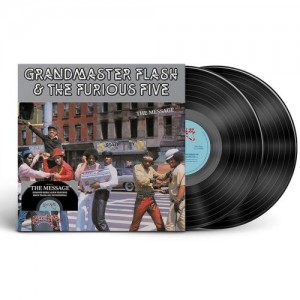 The debut studio album of American hip hop group Grandmaster Flash and the Furious Five, originally released in October 1982 on Sugar Hill Records and featuring arguably the most influential hip-hop single of all time in “The Message”, together with “Scorpio” - one of the greatest electro recordings ever produced. A gritty, plain-spoken and vividly cinematic portrait of black street life in New York circa ‘82 and a fascinating time capsule of rap's early attempts with the album format - this album earned respect on its own terms. Out of print for many years, we are very pleased to make this iconic and revered hip-hop album available again for fans old and new to enjoy.

She's Fresh
It's Nasty (Genius Of Love)
Scorpio
It's A Shame (Mt. Airy Groove)
Dreamin'
You Are
The Message
The Adventures Of Grandmaster Flash On The Wheels Of Steel
The Message (Instrumental)
New York, New York (Extended Version)
Message Ii (Survival)
The Birthday Party
Freedom (Instrumental)