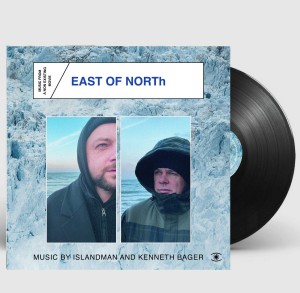 Kenneth Bager was invited to the cinema by his dear friend, the movie enthusiast & director Peder Pedersen. They watched the classic ‘The Thief’ by Michael Mann starring James Caan in the lead role. The soundtrack was made by the legendary German electronica band Tangerine Dream. The music, a mix of Electronic Avant-Garde, floating, ambient prog-rock made an immense impression on Kenneth. A few days later Kenneth had a visitor, Tolga Böyük from the Turkish band islandman, who was over in Copenhagen from Istanbul. The pair of them watched William Friedkin’s film ‘Sorcerer’ once again Tangerine Dream scoring the soundtrack. After watching the movie, Kenneth and Tolga felt the inspiration to do a soundtrack for a non-existing movie.

They started out by composing five tracks before nightfall. The next day, still excited about yesterday’s movie, the two came up with the album title ‘East of North’ (Tolga being from the east and Kenneth from the north). Together they kept going in the musical direction from the previous day, and managed to produce 10 tracks within 24 hours! They imagined a film through music which told a story about two people stuck on the arctic ice cap. One of them treasonously tries to fool the other. The album cover picture was captured during that session on a cold, windy day near the beach in Hellerup, Denmark. The music on 'East of North' is a tribute to some of history’s most significant electronic film composers: Vangelis, John Carpenter, and Tangerine Dream.

A1. The Meeting
A2. Blood Is Thicker Than Ice
A3. Betrayal (New)
A4. The Hunt Begins
A5. Wounds Of Sorrow
B1. Here To Eternity
B2. Re-arrange Your Face
B3. Love Of My Life
B4. Choices Of Consequences (New)
B5. The End