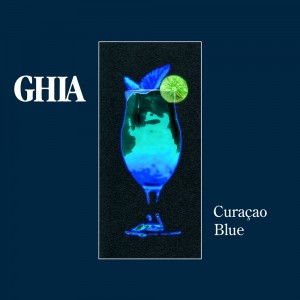 The story about the lost recordings of Ghia continues. Following the recently released "At The Hilton" single, The Outer Edge present "Curaçao Blue", the band's first full-length album. And it is simply mind-blowing to say the least! The LP features 10 unreleased tracks in a similar Balearic vein as featured on the single.

Incredibly, it was only just a few months ago that these tracks were rediscovered on some old tapes by band members Lutz Boberg and Frank Simon. Could anyone imagine that two physics students from a small German town could create such beautiful, thrilling music in their home studio? Although the technical aspects in the creation of the band's earliest tracks may have been straightforward, the outcome is high-quality, creative, modern jazz-funk, with one step in the electro-funk genre due to the use of a drum machine and synthesizer basslines. The album features mostly 4-track recordings, based mainly on the musicians' weapons of choice: a DX21 keyboard (later updated to the legendary DX7) and a guitar. Many things had to be done live in just one take, though the artists were unafraid of using overdubbing techniques to weave their instrumental journeys. The DIY aesthetics just add more beauty and uniqueness to the songs and compositions, and the result is an extremely harmonic work of undeniable musicality. Ghia delivers Balearic jazz-funk at its finest.

Though the music was recorded in Germany, Ghia had a true relationship with the Balearic region and effortlessly applied the vibes to their compositions. As a side note, one track on their earliest demo tapes was called "3 AM at Moëf Gaga" and we did not know what it meant. The band explained that Moëf Gaga is a nightclub on the Spanish coast that is actually still active today. Boberg and Simon, the two original band members of Ghia, visited the club in the early 80s and spent their holiday close to the sea. With their music, they intended to create a summery vibe, capturing a relaxed and soulful view of the seashore, likely with a drink in hand... Perhaps a Blue Curaçao?

The album starts with a revised version of the title track. The drums in this take are much punchier, and we thought that it would fit just perfectly as an introduction. We continue with the already classic "Down At The Hilton" that was featured on the single, but like us, we are sure you could happily listen to this track on repeat. Next up, "Jump In The Water" opens with a catchy delayed melody, which develops into another perfect jazz-funk piece with an extended guitar solo. Another remarkable song might be "In The Fast Lane". As the name suggests, an uptempo number, now with an electro-funk beat combined with speedy keyboard solos that almost sounds like a marimba. On side B, the album keeps the relaxed seaside vibes flowing. To round out the album, we are treated to two pieces that originated after the return home, with memories of the Spanish coast fading but still lingering, likely recorded between 1986 and 1988. Both are instrumental versions of songs to be used later for studio sessions with their new band member, singer Lisa Ohm (who you will hear on Ghia's next album!). On "Crystal Silence In Dub" we get a perfect downtempo groove, positively reminding us of the sound of the 1980s UK funk scene. The album ends with "Keep Your House In Disorder", here as an earlier, rougher, and funkier take than on the final vocal version, which could be found on the B-side of the "What's Your Voodoo" single.

The Outer Edge is the new label by record collector DJ Scientist, aka John Raincoatman. Frederic Stader is responsible for mastering and sound restoration of the material on this LP.

Matt says: Teasing us with a 7" a few weeks ago; we now get the full length LP from these German maestros. Balearic jazz-funk with a touch of elegance, class and sophistication which should find it soundtracking the most stylish of poolside haunts. The whole thing plays like a day of decadence spent at Pikes Hotel.