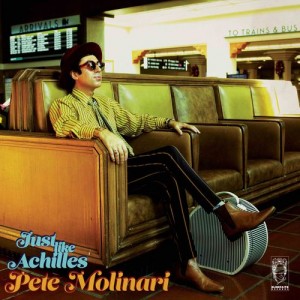 Pete Molinari is a country blues singer, songwriter from the Medway Delta. He was born into a large Maltese/ Italian/ Egyptian family in Chatham, Kent, where he was discovered by Billy Childish.

He’s got five critically-acclaimed albums’ worth of timeless folk, blues, rock and alt- country songs to his credit, plus a bunch more EPs.

He’s often described as a songwriter’s songwriter. Bruce Springsteen once publicly proffered: “Pete Molinari – if you don’t know anything about him, he’s great!”

Just Like Achilles is the distillation of everything Pete has learned since those years on the road as a travelling troubadour, playing tiny theatres and coffee houses everywhere from London, to New York, Paris to Nashville and around the world, eventually taking him to the most celebrated venues such as The Royal Albert Hall, The Royal Festival Hall, Carnegie Hall and Radio City Music Hall.

Just Like Achilles brims with big songs and huge choruses. After a first listen, it’s like you’ve known and loved this record forever. Although surprising for some who think he is the lone songwriter with his guitar, Pete is a big fan of Pop. Yes, somewhat of a dirty word today, but it is that timeless and well-crafted pop that created so many hit songs in the past that we still adore today.

Pete’s songs always cut straight to the heart of the matter. No fat, no artifice, no histrionics. The sound is real. Live. Real people playing real instruments. Front and center are Pete’s own majestic guitar chops and unique, soulful voice. Even on Achilles’ sadder songs, there’s a buoyancy and potency to them, an infectious effervescence that imbues life is for living, and it is that loving of life that we find celebrated in every song, arrangement and composition.

To coincide with Just Like Achilles highly anticipated release, Linda Perry organized an extraordinary event. She booked out the legendary Capitol Records’ Studio A and hit her contacts list to pull together a supergroup to join Pete in performing his new songs live in the studio. It included legends Ronnie Spector and Don Was, plus Mike Garson and Gail Ann Dorsey from the David Bowie band. Evan Rachel Wood also came along to sing on a couple of songs, while Jakob Dylan duetted with Pete on a very special version of “Waiting For A Train”.

So, everything was ready to go, ready for release. This was the beginning of 2020. And then .... well, as we all know, everything stopped. Now, two more years on, this is Take Two: Just Like Achilles is finally set to receive the release it always deserved.