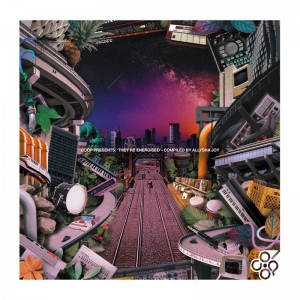 This 14-track LP gives us a solid glimpse into the current wave of Antipodean bruk / broken beat artists.

Allysha explains "the connection began with a guest mix for CoOp Presents Worldwide FM radio show. I was asked to guest on the show, so pulled together some heavy unreleased and unmastered "Australian" broken sounds. I immediately called Horatio, Close Counters and Setwun, some of my nearest and dearest inspirations and collaborators to get them in the mix! Within 24 hours I had a brand new beat from Setwun called 'H.B.Y', I ran up some vocals on a Close Counters track and landed a wild jazz-bruk collaboration called 'Fly' from Horatio Luna and Nikodimos! We all felt really blessed to be linking in with some of the innovators of the sound we love!

Also in the mix, I played a track by Lanu a.k.a Lance Ferguson, one of "Australia's" funkiest songwriters and producers. Mike Gurrieri and Chris Gill over at Northside Records had already been scheming to set Lance and I up on a music date for weeks, which turned into writing 'Rewind' . Lanu, along with Ennio Styles, have been integral in the broken beat sound down here from the early 2000s and they connected Jonny Faith in to bring 'Southern Stepper'.

After linking in over the music and working on some collaborations, Alex Phountzi and IG Culture asked me to put together this compilation. The first person that came to mind was Sampology. A wild ride of shifting harmony and incredible vocals, Sam delivered 'Sunny', featuring Maia. Also of Middle Name Dance Band acclaim and a beaming light of creative energy, Kuzko created 'Immunity' for the comp — their debut solo release!

Also up in Meanjin, Special Feelings and Squidgenini were making their own style of jazzy house music and we absolutely knew that they would kill it on the broken beat tip. They sent through 'On Heat' and 'Prophecy' respectively, and inspired me to write and produce 'Listen'. A track about the struggle to be heard as female and non-binary artists. A hard-hitter mixed by co-collaborator Yelderbert of our new duo project, Totek.

As my brother and the one that first introduced me to Agent K, I knew we had to get Ziggy Zeitgeist up in the mix! He immediately sent over a bunch of tunes, and from alongside all of the 30/70 Collective demo drum loops and fresh Z.F.E.X sounds, we selected 'Bruk Samba' featuring Cody Curry, the CC Dance Orchestra.

I had managed to pull together a bunch of tunes for the compilation and after a studio session one afternoon I was walking down Sydney Road and bumped into Silent Jay, Alien and A.KID a.k.a. ACID SLOP at their new spot, the Mandarin Dreams HQ. We were just chatting and above Jay's head I spotted the New Sector Movements record, 'Download This'! To see that they'd just been spinning this record felt so serendipitous, so I had to ask them to be on it! Acid Slop sent me through a tune literally the next day, called 'Everything Falls Apart' and within the week we got 'Walk Away', from Lori and Silent Jay. It felt complete.

The way that this music just effortlessly and lyrically fell together, is a testament to the broken beat undercurrent that runs within the jazz and dance music scene down-under. 'They're Energised' connects a scene of deeply talented and inspired musicians, collectively shaping the new wave of uniquely "Australian" bruk and broken beat music!"