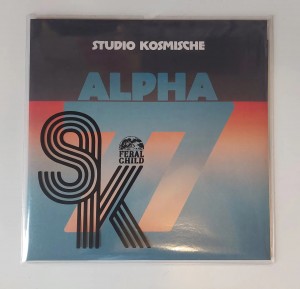 The last Feral Child release of the year is not only absolutely killer, but opens a run of 3 incredible volumes of Kraut / Kosmische themed sounds from Dom Keen’s STUDIO KOSMISCHE project, for Feral Child. All are released as runs of 250, on coloured vinyl, and come wrapped up in gorgeous screened SK|FC outer pvc sleeves.

Dom himself provides some background: “Studio Kosmische is predominantly the solo project of mine, (Dom Keen; The Hologram People, Holy Magick) though often ably assisted by regular collaborator Jon Parkes (Dreamlord Recordings) amongst others. Expect experimental drones and dreamy Krautrock vibes influenced -as the name suggests- by the legends of the classic 1970’s Kosmische movement.

These LPs are part an ongoing series, “Alpha 77”, “Omega 76”, “Gamma 75” and “Ritual 74” (available previously via dronerockrecords). “Alpha 77” and “Omega 76” came to life at the start of lockdown, recorded purely for meditative purposes to prevent the onset of cabin fever. Both collections were initially released May 2021 on limited short run cassette on the independent cassette label ‘Anticipating Nowhere’.

The title “Alpha 77” is derived from an effects processor (a collection of sound-processing modules including a pitch-shifter, ring modulator, phaser, tape delay etc) of the same name, made for Irmin Schimdt of seminal krautrock band Can. That machine was a tremendous influence on how I write, I more or less put together my own version of this which I use along with a looper pedal to create much of the music.”