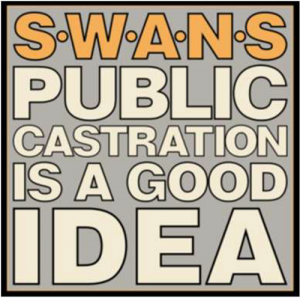 Swans’ live album, ‘Public Castration Is A Good Idea’, originally released as a bootleg in 1986, is now available officially for the first time ever, via Mute and Young God Records.

Led by Michael Gira, Swans formed in 1982 and produced a series of diverse albums before their dispersion in 1997 and after their reformation in 2010. During this time Swans have made their mark as masters of their craft and have since become an influential band for countless experimental and post rock acts.

The record includes a number of live recordings from shows across multiple venues in the UK in support of the release of ‘Holy Money’ in 1986, featuring tracks from that album along with ‘Greed’.

“... there's no denying the intrinsic entertainment value of having a copy of ‘Public Castration Is A Good Idea’ around the house. The title alone is enough to freak out your parents and roommates; imagine what'll happen if you actually play it for them.” - Pitchfork.