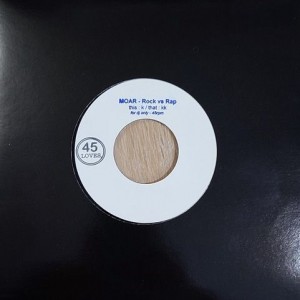 We know by know that when an idea enters the mind of French producer Moar and he sets off on a mission to the studio that we're in for a real treat. His 45 Loves series has been a staple of DJs who have the knack of turning the night around when the preceding track clears the floor. The DJ's secret weapon arsenal should include a DJ Loves bazooka like 'Rock vs Rap' trust us. Just imagine if Larry Mullen, The Edge and Adam Clayton ditched their mullet wearing frontman and headed across the pond to seek the services of the Def Jam crew to add some quick snap raps to the mix. With Moar behind the boards we have a great example of what that might sound like had that scenario played out. This one hits the spot! On the flip, the Young brothers instant classic riff meets Missy's brassy raps and it's the perfect blend of some hardcore rock with that Missy flow that you simply don't want to miss out on.

Matt says: It's officially Christmas party season. And what better way to satiate the office party peasants than a tasteful mashup of Missy Elliot vs. AC/DC & The Beasty Boys vs. U2.