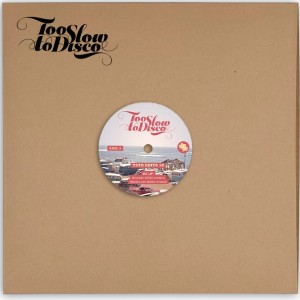 Record Label
Too Slow To Disco

Those Too Slow To Disco cats are back at what they do best - super smooth edits on limited edition 10". Greek producer DJ "S" is a bit of a veteran of the edits scene and with his own downbeat sound he quickly became one of the big names in the European disco scene too. He perfected his craft as a multi-talented music producer, experimenting with vintage black sounds and reviving old-classics in the form of remixes which made a serious impact among the internet and on his YouTube Channel which counts thousands (over 260k) of faithful followers!

As usual they've got me scratching my head and Pasta Paul already feverishly ramming them in the front of his record bag ready for his next DJ set. Sub 110BPM throughout, with hefty lashings of beach-side soul - think big choruses, powerful vox, smatterings of horns and strings and of course, those ever important B-lines - rolling and warm like the best rare groove joints. 10 points for whoever emails in with a full house of track IDs! Highly recommended, limited copies!

Matt says: No one quite smooths out the edges like Too Slow To Disco. Theie limited edits series has uncovered 'nuff poolside cool and pure, timeless sun lounger classics time and time again for our discerning ears. DJ "S" keeps true to the remit and delivers four essential joints of slow swagger brilliance.