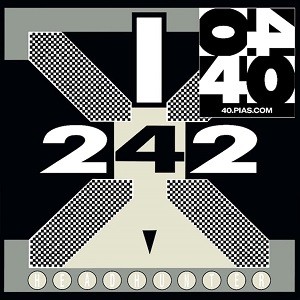 EBM is a real time bomb. A time bomb because this sound will continue to influence a lot of other groups in the years that follow. The precursors created a new genre which they themselves baptized Electronic Body Music: a set of sounds, collages and extracts gleaned here and there, dynamized by intense vocal parts. Front 242 creates its own path and then lays the foundation sof industrial electronic music. A development of rhythms which will be resampled in turn by a number of Eurobeat or technoid bands afterwards.

For Einstürzende Neubauten, it was ‘Haus der Lüge’; for Depeche Mode, it was ‘Music For The Masses'; and for The Cure, it was ‘Head On The Door’ - the moment when an honest album reveals itself to a wider audience and yet another group with an already solid reputation.

For Front 242, this passage is called ‘Front By Front’. Primarily, a hit called ‘Headhunter’, served by a magnificent video, signed off by the photographer and director Anton Corbijn. Boosted by the success of ‘Headhunter’, which remains their most famous title to this day, Front 242 finally emerged from the shadows.