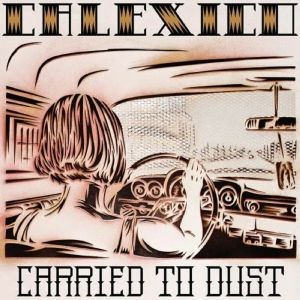 There’s always been intrigue and adventure at the heart of CALEXICO. Ever since they were a largely instrumental duo experimenting with their unique collection of instruments and soundtrack sensibilities, Joey Burns and John Convertino have constantly imbued their music with an unparalleled sense of drama, calling upon the myths and iconography of the American West and its Spanish speaking neighbour Mexico. Naming themselves after a town near the Californian / Mexican border in honour of this cultural mélange, they’ve spent the eighteen years since they met in Los Angeles mapping out musical territory that had otherwise been neglected or at the very least considered the preserve of historians.

Now, with CARRIED TO DUST, they have defined that sound, calling upon almost two decades of exploration and an ensemble of musicians that must surely be the envy of bands throughout the world. CARRIED TO DUST represents the pinnacle of their achievement, a thrilling and moving journey through a landscape that draws upon the modern world as much as it does the decayed reminders of times past, stumbling upon unexpected delights whilst always moving forward with a pioneering sense of purpose. It presents a vivid picture of a world in which listeners can immerse themselves much as one is caught up in the tangled narrative of a Steinbeck novel or the imagery of a John Ford film, and confirms CALEXICO as one of the great American bands of the 21st Century.

A1. Victor Jara's Hands
A2. Two Silver Trees
A3. The News About William
A4. Sarabande In Pencil Form
A5. Writer's Minor Holiday
A6. Man Made Lake
A7. Inspiración
A8. House Of Valparaiso
B1. Slowness
B2. Bend To The Road
B3. El Gatillo (Trigger Revisited)
B4. Fractured Air (Tornado Watch)
B5. Falling From Sleeves
B6. Red Blooms
B7. Contention City