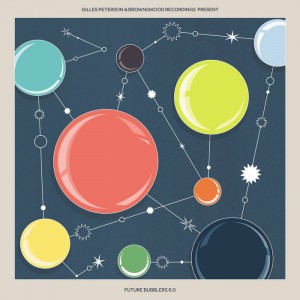 Brownswood Recordings releases the 6th edition of the Future Bubblers compilation. An expansion of Gilles Peterson’s network supported by Arts Council England, the ongoing talent discovery and artist development scheme focuses on developing unsigned talent and building audiences for new left-field music. With support from PRS Foundation as Talent Development Partners, the professional recording, manufacturing and physical release of Future Bubblers 6.0 is made possible. Unlike any other initiatives within music, the compilation acts as a springboard for the musician’s careers with the cooperative model providing direct revenue to the artists by a share of the profits resulting in a sustainable income to work from. Previous Future Bubblers include artists such as Yazmin Lacey, KinKai, MC Snowy, Forest Law and Kayla Painter to name a few.

The 9 track compilation is a musically diverse collection of tracks, fusing genres that span across Electronic, Alt-R&B, Alt-Hip-Hop, Spoken Word, Neo-Soul, Jazz and beyond. Opening the project, Plumm showcases her hypnotic vocals on ‘To Be A Woman’, a stripped-back, live rendition of the track whilst siegfried komidashi combines layers of instrumentation with his dream-like vocals on ‘Voyager One, Lost’. Up next, London-based Zeñel highlights their trumpet and guitar skillset alongside guest vocals from Plumm for ‘Crinje’ followed by Jericho Noguera’s genre-bending single, ‘Keeping On’ which is dedicated to remaining faithful and maintaining an optimistic mindset. Manchester-based Victoria Jane - who has gone on to host her own show on BBC Radio 1 - highlights her diverse vocal range in the emotive track ‘Good & Low-Key’ before Shirkers creates a cloudy instrumental for Ceeow’s vocals on ‘Like Summer’. Maintaining the ethereal sonic, Ceeow’s ‘Twice’ is reflective of his Rap and singing abilities followed by Zimbabwe-born, Norwich-based Tadi The Great’s Hip-Hop-meets-Psychedelic soundscape on ‘Catastrophe’. Rounding off the compilation nicely is nowsm’s epic ‘Rough Of The Felt’ which perfectly combines Breakbeat, House, and Experimental sounds.

Spanning just over 40 minutes, Future Bubblers 6.0 is an extremely impressive assemblage of talent who have all delivered top-shelf singles. Released both digitally and on vinyl, the compilation embodies the spirit of the musicians as well as the team behind Future Bubblers.

Each year, Future Bubblers are paired with an industry mentor who is tailored to their individual needs and from there, the journey begins. Each Bubbler will receive a number of opportunities that will ideally set them up professionally. The venture offers; one-to-one production workshops from music software company, Ableton, performances at live Future Bubblers showcases, recording live sessions from the iconic Brownswood basement, professional press shots and beyond the year, long-term support throughout their career.