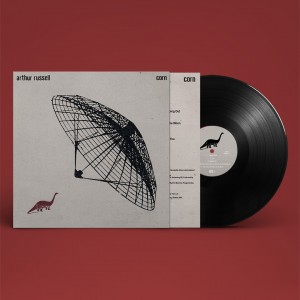 Russell fans know something of the Corn sound from Audika’s debut release, ‘Calling Out of Context’ (2004), which included four songs from these sessions: ‘The Deer In The Forest Part 1,’ ‘The Platform on the Ocean,’ ‘Calling Out Of Context,’ and ‘I Like You!’

This new collection includes rhythmic alternate versions of ‘Lucky Cloud,’ ‘Keeping Up,’ ‘See My Brother, He’s Jumping Out (Let’s Go Swimming #2),’ ‘This Is How We Walk on the Moon,’ and ‘Hiding Your Present From You,’ along with ‘Corn,’ ‘Corn (Continued),’ ‘They and Their Friends,’ and the closing instrumental ‘Ocean Movie,’ one of the most beautiful and curious Russell tracks ever to see the light of day.

Lucky Cloud
Corn
Keeping Up
See My Brother, He's Jumping Out (Let's Go Swimming #2)
This Is How We Walk On The Moon
Corn (Continued)
Hiding Your Present From You
They And Their Friends
Ocean Movie