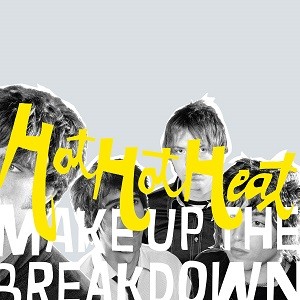 Hot Hot Heat’s classic debut album, filled with smart, energetic, dance-punk hits, returns to vinyl with this fully remastered LP edition. AllMusic called the album “an addictive, densely packed pop gem that ranks among 2002’s best albums,” and Pitchfork agreed, including it on their list of the best albums of 2002. Following closely on the heels of their critically-acclaimed Knock Knock Knock EP, Make Up the Breakdown is Hot Hot Heat's first full-length, recorded with Jack Endino at Vancouver, BC’s Mushroom Studios (with engineering help from Chris Walla of Death Cab for Cutie). SPIN Magazine had this to say about Knock Knock Knock: “Some retro new wavers hang themselves on their own skinny ties. While their peers lip-sych to Cure 45s, these Canucks take subtler cues from early-‘80s synth disco. It’s not new-wave worship, it’s the sound of punk teaching itself to dance.” Make Up the Breakdown delivered on the promise hinted at on the EP. Hot Hot Heat (along with peers like Radio 4 and The Rapture) blended angular post-punk twitch with danceable pop, effectively (and finally) persuading white dopes on punk to get on the good foot in the early 2000s.

Naked In The City Again
No, Not Now
Get In Or Get Out
Bandages
Oh, Goddamnit
Aveda (Remastered)
This Town (Remastered)
Talk To Me, Dance With Me
Save Us S.O.S.
In Cairo
Apt. 101
Move On