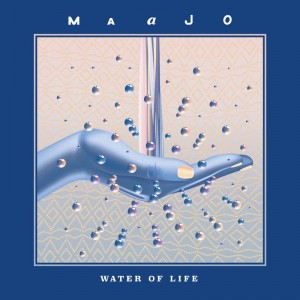 The three vocalists take centre-stage on the album: Waina hails from Zambia and sings in Nyanja, English and Finnish; a renowned musician in Zambia for over two decades who now calls Finland home, Waina wrote a song that reached the finals of the 2020 Afrimusic contest. Gilbert K primarily sings in his native Mauritian Creole while comprising part of the percussion line. He made his way to Finland by way of South Africa and China, eventually winning the Voice of Finland show. Gilbert K has played with such legends as Tony Allen, Andy Summers, Diana King, and Suzanne Vega. Ismaila Sané is from the Casamance region of Southern Senegal and sings in Wolof (a widely-spoken language in West Africa) on "Ndekete," and in Jola (a smaller language in Casamance) on "Èwàn".

Maajo is a sonic, linguistic, and cultural melting pot that has come together in Tampere, Finland, like a tropical breeze from the cold north. Their musical explorations lead from equatorial soundscapes to the woods and moods of their native Scandinavia. African influences, electronic beats and organic rhythms, ethereality and the sounds of nature all make up the patchwork sound of Maajo.

Not only is Maajo's music a way of travelling to faraway places, the songs themselves have travelled all over the globe. Maajo has evolved from a sample-based electronic music project to a full-sized band, including African vocalists and musicians. The group has put out two full-length albums and three EP's on Queen Nanny records, in addition to a release on German label Permanent Vacation. Maajo has received the remix treatment from artists such as Luke Vibert and Call Super, and has toured festivals and clubs internationally. The band has built a dedicated international following having been championed by the likes of Gilles Peterson (Worldwide FM), Tom Ravenscroft (BBC Radio 6), and Tim Sweeney (Beats In Space), while they've been featured by KEXP (Song of the Day), Resident Advisor, Ransom Note, and Pan-African Music.

"Water of Life" is out on Wonderwheel Recordings October 14th, 2022, both digitally and as an exclusive, limited-run 2xLP.