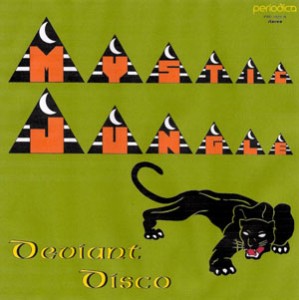 Absolutely ingenious album from relative new comers Mystic Jungle, aka Dario di Pace who, frankly, will astonish with the creative meanderings and twists on retro grade electro disco, boogie and proto house. Based in Naples, and head of the Periodica label; it's been some while since I've heard search an authentic reaction of styles from the golden age of the glitterball.

We're not talking no beige rehash here though folks, Mystic Jungle have conjured up an album of future classic cosmic-sherm disco - the kinda tracks that if you were searching through Baldelli or Ron Hardy mixtapes you'd be expecting to pay at least £50 each for a dusty copy!

Starting with the Mexican wave boogie of "Don't Stop Your Love", which you'd be convinced is a lost nugget from '83, we move through to "Get Down On It" - another sun-blushed boogie bomb with the spirit of California in its sights. Side B opens with the smoochy twilight-island epic, "Hold On Your Dreams", which, aside from have one absolute mother of all guitar solos, basically orders you to make your snazziest cocktail and comfortable in the hammock as it takes you on its psychedelic-disco rocket ride.

"Money Wonder" is that wigged-out moment of bedroom boogie you've been waiting for. With gilded guitar lines, catchy vocal hook and gritty drumbox it's superb keyboard solo has all the garnishings to really show off its pedigree as this bona fide dancefloor titan struts proudly onto the scene. So good! Just enough time for "Keep Alive This Fire" which keeps to the wonky disco flavour, injecting a plethora of vintage synth fx across a rattly drum rhythm, disco-not-disco basslines and vocal combo for a quirky and fun end to this rather life affirmed collection of modern dancefloor grooves. Mystic Jungle proves he's one of the hottest cats on the current circuit and I urge you intently to get this album ordered fast!

Matt says: Stupidly good modern genius who recreates some of the best bits from Italo, cosmic, proto-house and boogie in his own clumsy, earnest style which you'll be convinced is a lost nugget.Future classic alert!