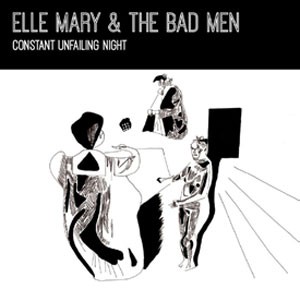 Led by Elle’s guitar playing and beautiful, nuanced voice, ‘Constant Unfailing Night’ peels away layer after layer of expectation. Rhythmically challenging and yet unassuming, it leads you down a rabbit hole of emotions, sonics and stories, reminiscent of bands from Smog to Sharon Van Etten.

Though firmly grounded in folk-noir, the album carefully carves out its own space. From “Falling”, a song that seemingly gets more complicated after each listen, to the crescendo at the centre of “Behave”, where the vocals open the door from folk to anger, Elle Mary & the Bad Men have crafted a journey. Elle Mary explains: “This album has been written over the course of three years, a project started in response to a break up, a shift, a necessity to carry on. As I wrote and filtered out songs, the focus started to change and became about tapping into some part of the subconscious, looking for the part of me that knows better, but that I seem to ignore. The Bad Men, Michael Dubec and Pete Sitch, have joined me on this journey and probably know me too well as a result of it. The weight they add to the songs is incredible and I really couldn’t ask for a better band.

“Space and a minimal approach has always been the most important part of the music to me; to do more with less. It’s this that draws me in the most about the artists I love (Low, Julie Doiron, Bill Callahan etc.). The space allows my voice to sit on top and the words seep in. I don’t really enjoy telling people what the lyrics mean; I prefer them to interpret for themselves: that perspective interests me; I like the freedom of taking what you want from a song.”