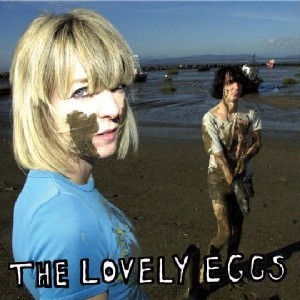 The second album on the band’s own label. Described as unhinged, strange, bizarre, cuckoo and howling mad; but with a growing army of fans including Radio One’s Huw Stephens and Art Brut's Eddie Argos you'd be crazy not to fall in love with their underground grunge-pop sound. Inspired by everyday life, coupled with a fierce ethos that music should be about magic and art and feeling and fun, the Lancashire duo have more in common with writer Richard Brautigan & artist David Shrigley than they do with their musical peers. Occasionally satirical and often surreal The Lovely Eggs won't deliver a straight forward love song to your door, instead you’ll be taken on a journey into Holly & David’s world where there are no seatbelts!

Receiving airplay from Huw Stephens, Steve Lamacq, Marc Riley, Rob Da Bank, Tom Robinson, Gideon Coe & John Kennedy, The Lovely Eggs have recorded sessions for BBC Radio 1, BBC 6 Music & XFM. Last year the pair were invited to perform 5 shows at SXSW in Austin Texas, where they also recorded with legendary cult musician and artist Jad Fair. The band have enjoyed press from Artrocker Magazine, The Guardian, Maximum Rock and Roll & Everett True. Their debut album If You Were Fruit ranked in the top 40 records of 2009 by Artrocker and was nominated for XFM's ‘Debut Album of the Year’. In the last 2 years the band have played hundreds of gigs around the UK, USA & Europe supporting the likes of Shonen Knife, The Slits, The Television Personalities & Eddie Argos as well as a 2 month tour of America.