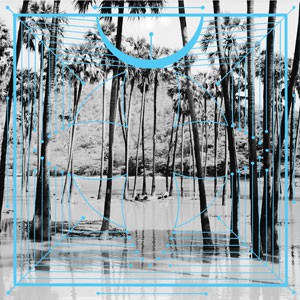 All eight tracks on "Pink" were originally released on a series of 12"s through Kieran Hebden’s Text label in 2011 and 2012. Later made available on a Japanese CD and download, the record is now finally being released on a full vinyl abum. The album opens with "Locked", which mixes shards of synths and gamelan flutes with a dubstep style bassline wobble. Post-dubstep? Future-jazz? Global-bass? We don't care, we just love it. "Lion" is 4/4 but smudged and shoulder-dropped, its swinging hats forcing the hips to wiggle and the radioactive atmospherics giving it that dark, UK edge. "Jupiters" contrasts blissed-out digital arpeggios with hard-as-nails rumbling UKG beats. "Ocras" is a nagging, incessant late night club number - druggy and disorientating, its repetition and driving nature make for a hypnotic ride. As the title hints at "128 Harps" features plucked harp, which adds melody to the bruising bass rumble and hefty syncopated rhythm. Next up is upbeat, straight-ahead funky house cut "Pyramid", followed by Kraut-inspired, beatless synthesizer jam "Peace For Earth". Last but not least is "Pinnacles", Hebden's incredible jazz house cut based on a spiritual and funky sample from the one and only Buster Williams. The track moves effortlessly along an extended house backing track before opening out into spinetingling jazz piano work.